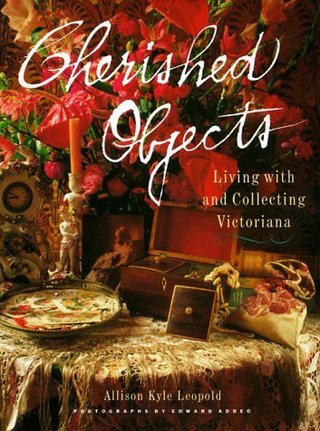 A collector’s cornucopia of delights, Cherished Objects reveals the secrets of collecting Victoriana in an expert text and 330 full-color photographs of parlors, mantels, tabletops and more, all filled with beautiful objects cherished by collections more than 100 years ago.

For the sophisticated Victoriana buff it offers new ways to enjoy and expand established collections and insights into the times; for the newcomers, it opens a window onto a past filled with intimate and endlessly varied treasures.

“For those of us who collect, it is often the human factor that counts: the style of an object is not nearly so interesting as who owned it, what it was used for, or what it represented to the society that created it. That’s why this book offers an intimate glimpse of the whys, hows and wherefores of Victorian objects. It is a collection in and of itself of the most intriguing, sometimes endearing, often confusing, but always fascinating objects, oddities, romantic keepsakes, curiosities, memorabilia, bric-a-brac, bibelots, and, to go back to some authentic 19th century terminology, thingums and thingamabobs, with which 19th century Americans like to surround themselves."

Victorian Splendor, Recreating America’s 19th Century Interiors
“As lavish and rich as its subject.”
--Publishers Weekly
The Victorian Garden
“…an inspiring book that I have trouble putting down!”
--The Garden Writers Association of America
Cherished Objects, Living With and Collecting Victoriana
“One of the finest lavish albums about Victoriana ever to appear. The photographs are dazzling and the wealth of information provided is unique.”
--The New England Review of Books